Some of my flowers are out of sync right now. We are past the middle of October, and my candytuft, a spring flower, has started blooming. It is pansy season, not candytuft season! Denver is known for sunny weather, but yesterday was 82 degrees, 20 degrees over our average. With the weather out of sync, it’s no wonder that my garden is out of sync as well. 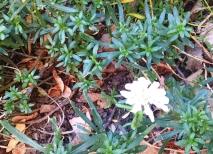 There isn’t anything I can do about plants that start blooming at the wrong time. I can water, I can mulch, but mostly I just hope that our temperature drops slowly enough that the plants are not damaged in the transition to the inevitable cold.

Sometimes my soul can feel out of sync with the “normal” seasons. Thanksgiving might roll around, and some years, I am just not feeling thankful. Or the festive Christmas season might be a struggle at times. Telling myself (or having others tell me) that I should feel a certain way usually isn’t helpful. “Shoulds” are not generally encouraging. 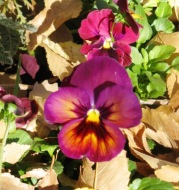 When I am out of sync, feeling like there is a huge disconnect between my soul and where I’d like to be, honesty about my status is important.

I remember the Thanksgiving after my mom died, I was stirring gravy and salting it with my tears. Gravy had always been mom’s thing; I was a gravy novice. And in that moment, 3 months after her death, tears were the best answer for my soul.

Oh, I could think of things I was thankful for, but that’s not really the point. The best place for my soul at that time was in honest grief. Being present with my feelings, knowing I could also remember good times that had gone before, and anticipate that joy would come again. Out of sync with Thanksgiving, but in sync with the condition of my soul. And trusting that honesty would eventually yield thanksgiving.

What about you, what do you do when your soul is out of sync with the seasons?

Follow Flowers For Your Soul on WordPress.com
Small pie for us. Birds enjoyed lots of cherries too. ( This little pie plate takes 2 cups of filling, just enough for a little slice each tonight, then a little breakfast pastry)