One month ago a middle-of-the-night hail storm was centered on our neighborhood. The noise roused us from our sleep and we peered out the windows, watching the pounding hail shred leaves from the trees and turn our lawn white with hailstones. The next morning, the damage in the garden was clear. Poppies shorn of their buds, leaves and twigs everywhere, a small patch of mums reduced to stalks.

Over the next few days I raked, trimmed, gathered, and wondered – which plants would be damaged so much that they wouldn’t bloom this year, and which ones would come back?

Many plants are resilient, but for perennials that bloom just once a year, the bloom cycle may be lost and the visible recovery wouldn’t be until next year. That was certainly the case for the poppies. A few that were under a tree bloomed, but most of the buds were cut off and the next hope for bloom is a year away.

Since I have a succession of blooming perennials, in the month since the storm I have enjoyed many rose blossoms, penstemon, flax, honeysuckle, daylilies, yarrow, lavender and more. A moister-than-average spring has resulted in remarkable roses, and cooler weather until just this week meant that the blossoms opened slower and stayed beautiful a bit longer than usual. 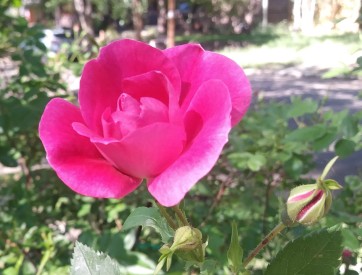 The most striking change is in a small patch of mums by the front steps of my house. The day after the storm, the mums were reduced to just a few stalks. Almost all the leaves were stripped off. I think they got hail directly from the sky and then shooting off the roof as well. I wondered if they would recover for the late summer/fall bloom.

Now, a month later, the damage to the mums isn’t even visible. Green leaves fill the healthy stalks, and tiny buds are forming. They have proven to be quite resilient, and there is hope and growth evident in the plants.

Resilience, hope, growth. That is what I am seeing right now in my garden. And it is welcome encouragement.

This season has been full of sickness, loss, and grief for a number of people in my circle. Some of them probably feel like the mums looked the day after the hail storm – stripped down to nothing. For some, the damage is visible. Others are suffering from broken hearts and broken relationships, unfulfilled dreams. For those, everything looks healthy from the outside, but there are no blooms, it feels like a barren season.

As I look at the new growth in my garden, I pray for those who are struggling. For resilience – the ability to keep going in the midst of dismaying circumstances. For hope – the belief that some good may some day come out of the shreds. For growth – those first tender shoots of newness pushing up out of the damage.

It also strikes me that I keep going back out to the garden to look, to see if there are changes – to look for resilience, hope and growth. As the gardener, I cared for the garden and didn’t abandon it in the disarray following the storm.